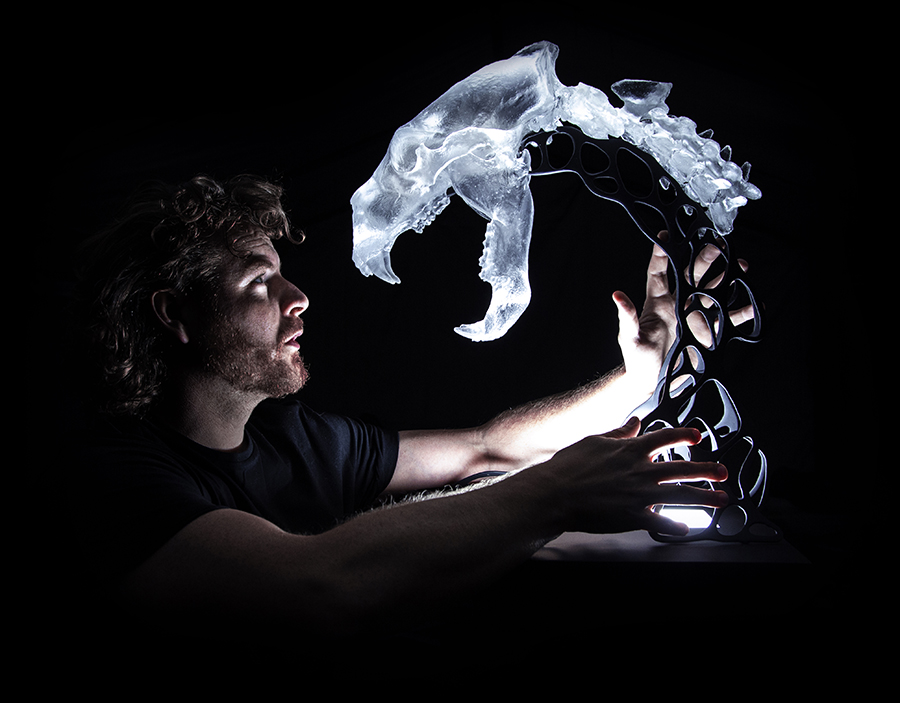 This page provides an overview of The Fragile Fight. For more information about current works, please visit;

For the first time in our history contemporary British artist Matthew Penn and his Fragile Fight project have recreated and articulated the entire skeletons of selected endangered species in cast crystal glass, highlighting the fragility of nature and the delicate balance which our climate and actions play on our fractured natural world. In a medium which he believes will translate the message of climate change and biodiversity loss into one common globally visual language, vigorously fusing art and conservation into a singularity. A hauntingly beautiful reminder of the fact that the human race has caused the catastrophic destruction of countless animal species and their habitats.

These species are the poster children and symbol of the anthropic damage we as a species have caused to the planet. These globally recognised species will be used to grab the attention of the world, inspire change, and ignite action. The sculptures will showcase not just a message for awareness but a collaboration with technology innovators by fusing art/science and technology together. We have reached a critical mass that has driven us to a tipping point, this is a pivotal point in our Anthropocene epoch.

A United Nations report recently outlined that over 1 million animal and plant species are now tragically threatened with extinction. This sadly is probably an underestimation of the true threats many more species unknowingly face.

The Fragile Fight will be able to shine a light on species and habitats on the front line of climate chaos and we are now willingly or unwillingly aware that we have entered the 6th Mass Extinction event on earth. During its timeline we aspire to learn and deliver ways in which we can change our human activity, to benefit the complex ecosystems that sustain us to prevent an escalation of this once predictable future.

Penn’s Fragile Fight’s cast glass skeletons represent life and death, its powerful architectural structure but also the fragility of the once balanced animal kingdom; the use of glass and skeletal form in this project creates its powerful metaphor, they are the physical creation of probability that we must not let be the last incarnation.

Forged in the furnace of fire with dedicated hands, the visual impact of these unique artworks are the focal point of this attention-grabbing approach. Inspiring behavioural change by creating exhibitions and Installations for the public to interact with and explore, the viewer is ripped away from the real world to transcend into a sensory deprivation that solely focuses the senses on the fractured mortality of the artworks and the potential consequences of our actions.

The project has started its exploitation with a careful selection of endangered and extinct species. Spearheaded by the completion of the most important artwork created to date; the monolithic sculptural installation of a female polar bear, titled “FRAGILE FIGHT 001 - Ursus maritimus”; her skeleton entirely cast from pure clear crystal glass suspended motionless in a foetal position within her circular provocative industrial metal membrane, which towers over 3 metres tall. Protectively encompassing her, the vulnerable fractured icy imitative presence radiates the refracting light that penetrates her form like an ethereal life force. She is the symbol of the Fragile Fight and the inspiration to all that stand in her presence; she is the glimmer of light in the darkness, and she drives us to change the negative evolution we have now created.

Beside her will stand her fragile army ready to fight shoulder to shoulder for their continued existence or memory: they strive to halt the genocide of biodiversity.

Many more species will join the Fragile Fight collection in what Penn has called the - “ARCHIVE”. The Fragile Fight is designing a permanent home for the ARCHIVE that will be purposefully built as a modern-day reimagination of a museum and a cradle of life for the creative arts/conservation and science, it will be an artistic safe haven where all are welcome.

“By displaying the animal kingdom in such a fragile yet powerful paradox, and an intriguing juxtaposition between life and death, I believe it will capture the interest of those who want to learn more about the species with which we equally share this earth and the mission of the Fragile Fight.” – Matthew Penn

Over the past 5 years since the project's inception, Penn has invested capital raised from sales of his artworks into the project, using profits made from his figurative artworks which include hyper-realistic portraits and bronze sculptures, these artworks were the prequel to the immediate narrative and will continue to fuse with the Fragile Fight and play a vital role in its artistic embodiment.

We are as much a part of the ecosystem as all other species and these artistic figurative presences will showcase our fragility alongside portraits of those who dedicate and sacrifice their lives to the greater cause, they will become the watchers and guardians.

If we stay on this current trajectory; the world will not be the same for our children. It will be less diverse and abundant, more chaotic, and ultimately; harder for them to inhabit with their fellow organisms. We must stop looking at the world through guilty eyes and blind faith, we have the ability to rewrite the narrative of our epoch.

Within our DNA is the code to succeed; We don’t have to change the world on our own, we must change the world together. Let’s stamp our era in the history books where future generations look back at us and respect who we were for what we did for them. Let us be the inspiration for millennia and halt this perpetual cycle of destruction.

Conservation has inspired the Fragile Fight to push the boundaries of artistic innovations, we must put our differences aside and relish our ability to work together and unite action worldwide

The Fragile Fight is the art of conservation and a fight for survival. The time for blame is over, and the era of action must start.